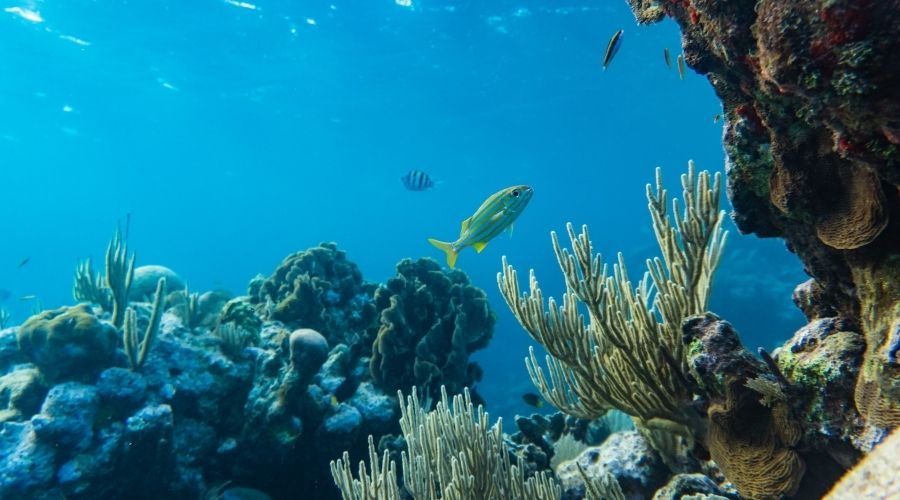 So, what is ocean acidification? It’s the drop in pH level in the oceans due to an uptake of carbon dioxide from the atmosphere. High carbon dioxide emissions have caused the oceans to acidify at a fast rate. The consequences to human and marine life are severe.

1. The ocean absorbs approximately 26% of the carbon dioxide we produce

26% of the carbon dioxide we produce is absorbed by the ocean. This is equal to 22 million tons a day. This is mainly from the consumption of fossil fuels.

According to ocean acidification stats, acidity has increased by 28% since the Industrial Revolution. The average global surface ocean pH has dropped by 0.1 pH units from 8.2 pH in pre-industrial times to 8.1 pH today. This is 100 times faster than any change in acidity in the past 100 million years.

3. Acidification is higher in colder areas

Acidification weakens and dissolves the structures formed by calcium carbonate, such as shells. The more acidic the ocean becomes, the faster the dissolution of the shells.

Coral reefs have declined by 50% in the past 50 years due to calcium carbonate deficiency. Coral reefs provide shelter for marine life. They protect coastal areas by breaking storms and waves. Tourism in coastal regions is also partly fueled by coral reefs in shallow waters. As the reefs die, tourism decreases.

As the pH drops, the pH of the bodily fluids of most marine animals also drops. It takes energy for highly developed animals to adapt to the changes in pH levels. This energy deficiency affects other bodily functions, such as the formation of shells.

9. Acidification also leads to a decrease in the oxygen an animal can carry

10. Over 3 billion people rely on the ocean for food

More than 3 billion people rely on the ocean to provide food in one way or another. The decrease in marine life leads to an increase in food prices. This impacts a world where food insecurity is already dire.

The ocean has undergone acidification before, with severe consequences for calcifying organisms. 56 million years ago, many coral species went extinct during the last acidification event. Today the pH level is declining ten times faster.

12. Acidity could increase by 150% by the end of the century

Should ocean acidification continue at the current rate, it will drop by 0.3-0.4 pH units by the end of the century. That is 150% more acidic.

13. We could witness an ecological collapse by the end of the century

The ocean may become inhospitable to marine life such as coral reefs and shellfish. This could result in ecological collapse by the end of the century.

14. Acidification could cost the world economy up to $1 trillion

The economic repercussions of acidification will cost up to 1 trillion dollars just for corals and mollusks alone.

15. It will take us hundreds of thousands of years to undo ocean acidification

The recovery of the oceans will take hundreds of thousands of years—potentially for as long as our species last. We might never see the oceans fully recover from this.

What Is the Leading Cause of Ocean Acidification?

The excess carbon dioxide in the atmosphere comes from human activities, including burning fossil fuels and deforestation. The carbon dioxide then dissolves into the oceans, causing further acidification.

What Can Be Done To Stop Ocean acidification?

Consider making these changes to lower your carbon footprint:

These ocean acidification facts paint a picture of how serious this problem is. Without immediate action, human and marine life will be affected significantly. It is time for us to raise awareness and act against ocean acidification.