Ocean Pollution by Country: Who Are the Biggest Polluters? 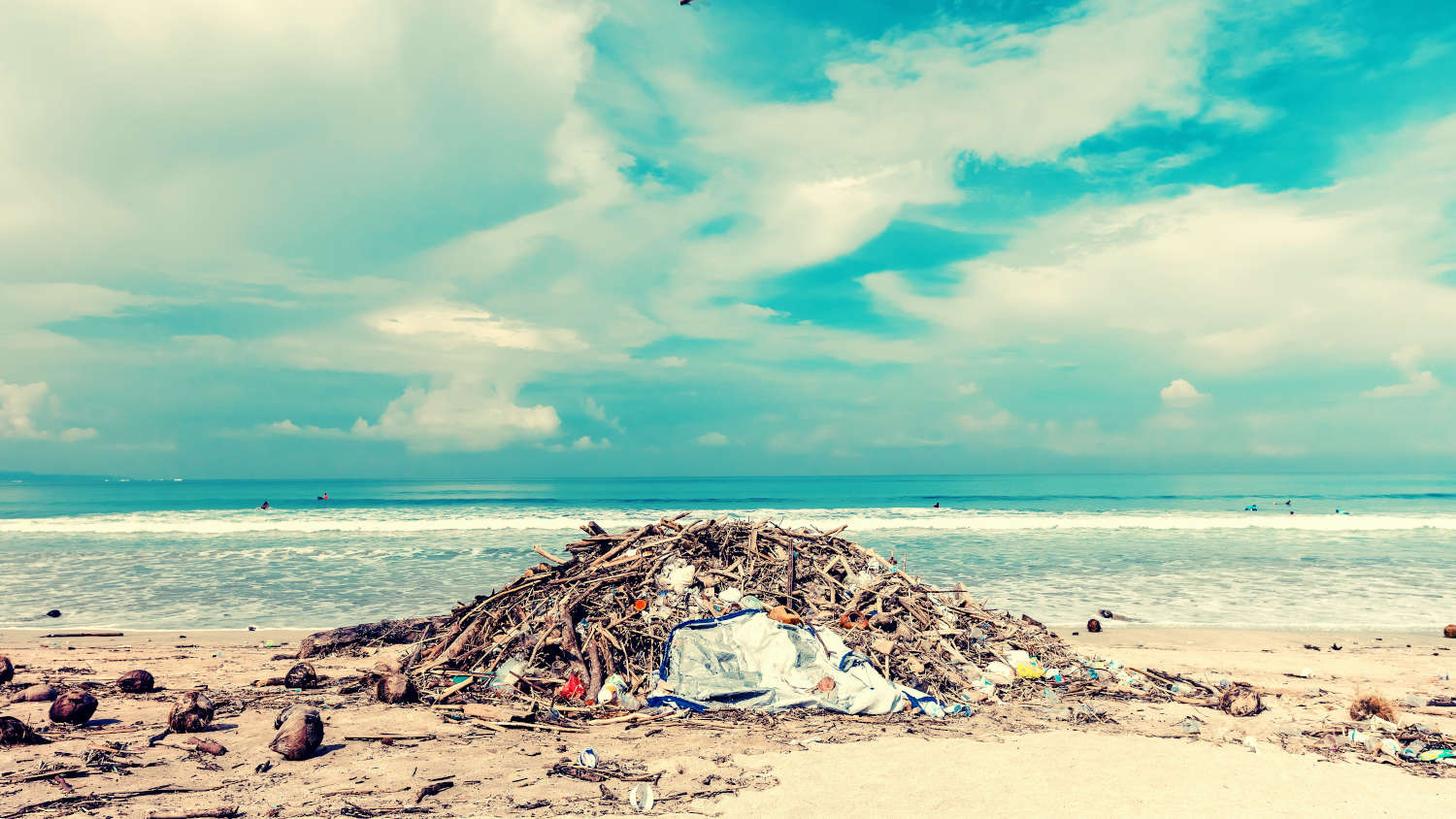 Every day, marine life is put at risk due to increasing ocean pollution. In fact, an estimated 817 animal species around the world are affected by pollution in the ocean every year and this number is increasing with time.

About 1.4 billion pounds of trash per year enter the ocean. Much of this trash is plastic waste, one of the biggest dangers to marine life.

How Much Pollution Is in the Ocean?

Pollution in the ocean is getting worse. Horrifying statistics show that the amount of plastic in the world will outnumber the number of fish in oceans by 2050. In 2010, the amount of mismanaged plastic waste amounted to 31.9 million tonnes. Out of this, 8 million tonnes, which is 3% of global annual plastics waste, entered the ocean.

The majority of waste that enters the ocean is plastic waste generated in coastal regions. In 2010, it is estimated that 99.5 million tonnes of waste were generated within 50 kilometers of the coastline.

The more waste that accumulates in the ocean, the more danger marine life is in. More than 100,000 marine mammals and over 1 million seabirds die every year due to plastic pollution.

Dead zones are increasingly appearing across the ocean. These are areas in which most marine life can’t survive due to a lack of oxygen. Researchers estimate around 500 dead zones exist throughout the earth’s ocean, covering almost 250,000 square kilometers.

You can’t talk about how much pollution is in the ocean and not mention the Great Pacific Garbage Patch. This is a collection of floating plastic waste and marine debris within the north pacific ocean. The collection is caused by swirling ocean currents. The garbage patch spans waters from the West Coast of North America to Japan.

The garbage patch is estimated to cover a surface area of 1.6 million square kilometers. This is twice the size of Texas. The debris in the patch is so much that a year-long clean-up attempt of the North Pacific Ocean, using 67 ships, would only clean under one percent of the area.

Where Do Most of the Plastic in the Ocean Come From?

An analysis of the biggest ocean polluters shows that most land-based waste comes from single-use plastics such as plastic bottles, food wrappers, and cigarette butts. These are the types of plastic that mostly get into rivers and from here, flow directly into the ocean.

Let’s take a closer look at the distribution of types of consumer plastic waste found in rivers:

Jenna Jambeck, an environmental engineer at the University of Georgia, analyzed with a team of researchers, the worst ocean polluting countries. The team found that most mismanaged plastic waste comes from Asia.

The study showed that China and Indonesia are the main sources of plastic pollution for single use: bottles, packaging, main bags polluting the oceans. China takes the lead with around 28% of the global total, followed by Indonesia with 10%, and the third is the Philippines and Vietnam with 6% each. Other leading countries include Thailand (3.2%), Egypt (3%), Nigeria (2.7%), and South Africa (2%).

The United States may not be among the top ocean polluting countries but is also guilty of ocean pollution, however at a much lower level than China. 0.11 million metric tons of plastic garbage found in oceans come from the US.

Part of the reason why these are the worst ocean polluters is that they are coastal countries crossed by the largest rivers such as Yangtze, Nile, Amazon, etc., or located on islands that drain the most plastic in marine environments.

The Top 10 Rivers Carrying Waste To The Ocean

We can’t categorize ocean pollution by country without taking a look at the top biggest polluting rivers. Why is this important?

Rivers are a significant source of land-based marine pollution. Plastic waste flows from the rivers directly into the ocean.

These are the top 10 biggest polluting rivers:

The Yangtze is Asia’s longest river and the third-longest river in the world. It also is the biggest ocean polluter. The river flows into the East China Sea near Shanghai and is crucial to China’s economy and ecology. It is estimated that 1,469,481 tons of plastic waste flow through this river and into the oceans.

The Indus is one of Asia’s largest rivers, flowing through parts of India and Pakistan into the Arabian Sea. The river carries with it about 164,332 tons of plastic waste every year.

The Yellow River is believed to be the cradle of Chinese civilization. It’s also one of the biggest carriers of plastic waste at about 124,249 tons annually. The huge amount of waste has rendered much of the river’s water undrinkable and about 30% of its fish species are believed to have disappeared too.

Hai river connects two of China’s most populous metropolitan areas, Tianjin and Beijing as it flows into the Bohai Sea. The river is estimated to hold 91,858 tons of plastic waste every year.

The Nile is believed to be the world’s longest river and flows through 11 countries before entering the Mediterranean Sea from Egypt. The river supports the region’s main economic activity—agriculture. When it comes to plastic waste, The Nile is estimated to carry 84,792 tons per year.

The Ganges provides water to more than half a billion people in India. Unfortunately, this is one of the most polluted rivers due to sewage, agricultural and industrial waste as well as an estimate of 72,845 tons of plastic that end up in it annually.

The Pearl River enters the South China Sea between Hong Kong and Macau. Sewage and industrial waste are major polluters of this river. 52,958 tons of plastic waste are believed to flow into the river annually.

The Amur River rises in the hills of northeastern China and lies between China’s Heilongjiang province and Russia’s Siberia before getting into the Sea of Okhotsk. 38,267 tons of plastic waste end up in the ocean through the Amur River.

The Niger is West Africa’s main river, supporting over 100 million people. It flows through five countries before entering the Atlantic Ocean from Nigeria. Frequent oil spills in the Niger Delta have caused widespread water contamination. The river is responsible for 35,196 tons of plastic waste that ends up in oceans annually.

The Mekong river flows through six countries in Southeast Asia, including Vietnam and Laos. Out of the total plastic waste carried into the ocean through river systems, Mekong is responsible for 33,431 tons.
Which country pollutes the ocean the most? (H2)
China produces the most plastic waste in the ocean by country. This is because the country lacks proper waste infrastructure and recycling processes.

Where Is the Most Plastic in the Ocean?

The pacific ocean is believed to be the most polluted ocean given that The Great Pacific Garbage Patch is the largest pile of ocean plastic waste in the world. It is located between Hawaii and California. Once plastic waste enters the oceans from coastal regions, it migrates towards the center of ocean basins forming the patches of waste.

What Is Ocean Acidification?

How Does Marine Pollution Harm Wildlife?

Marine pollution and plastic, more generally, cause the death of millions of animals and marine wildlife annually. This is mainly through starvation or entanglement. Close to 700 species have been affected by plastic.

By understanding ocean pollution by country, we can have a better idea of what is causing so much debris in our ocean, and maybe we can put in more effort to fight it.

The effects of ocean pollution are far-reaching and need each one of us to get involved before plastic takes over the ecosystem. A lot of marine life is at risk of extinction, hence the reason we need to act now.