Plastic Pollution Causes & Effects: What Are the Solutions to Stop it?

Take a second and think about it; have you ever gone a day without seeing something made from plastic? The answer is no, right?

Yes, it’s crazy. Plastics are all around us. The planet is swimming in discarded plastic, which is harming animal and human health.

Plastic pollution has become one of the most pressing environmental issues, as the rapidly increasing production of disposable plastic products chokes up efforts to deal with them. It’s now more important than ever for all of us to come together and try to reduce plastic pollution. Mother Earth needs us.

So next time you go shopping, don’t forget to carry a paper or cloth bag instead of carrying your shopping in plastic bags. Also, get a reusable coffee cup for your daily caffeine fix. Carry water in a reusable bottle instead of buying bottled water every time you get thirsty. These are just a few simple ways you can help to reduce plastic pollution whose ill effects are irreversible.

But before we get to more solutions for plastic pollution, let’s first understand what it is and why it’s such a huge problem.

What is Plastic Pollution and Why is it a Big Problem?

Simply put, plastic pollution occurs when plastic gathers in an area and begins to negatively impact the natural environment, causing harm to animals, plants, and humans.

As the world’s population continues to grow, so does the amount of garbage we produce. Our on-the-go lifestyles require easily disposable products—think coffee cups, soda cans, or bottles of water. This high demand has seen the amount of plastic produced increase significantly. Production of plastic increased from 2.3 million tons in 1950 to 448 million tons in 2015. Production is expected to double by 2050.

The major causes of plastic pollution today include:

Did you know that you use 40% of your plastic just once? Yep, you read that right. Almost half of the plastic that we encounter is only used once then thrown in the trash bin. Single-use plastic such as bags, bottles, and food packaging make the most amount of plastic pollution.

Every year we use several billion single-use plastic items and most of it is left behind as litter causing so much pollution. Trash dumps and landfills are major problems, as they allow pollutants to enter the ground and affect wildlife and groundwater for years to come.

When it comes to bottles, your favorite on-the-go drink is another cause of plastic pollution. If you look at your nearest convenience store, you’ll see that majority of drinks and beverages come in a plastic bottle. The biggest problem with these bottles is that we consume so many of them and use them just once. An estimated 583.3 billion plastic bottles are sold yearly and more than half of them end up as trash posing a threat to animals and humans.

Another small plastic item, easily ignored but poses a huge problem to the environment, is straws and stirrers. In just the U.S. alone, an estimated 500 million straws are used every day. In the UK a minimum of 8.5 billion to 42 billion straws are used every year. The major problem with plastic straws is there’s little to zero chance that they can be recycled because of its structure. Single-use straws take more than 200 years to break down. Many end up choking sea turtles or in the bellies of fish.

Commercial fishing is an economic necessity for many parts of the world, and tons of people eat fish for their daily survival. However, this industry has been a major contributor to plastic pollution in the oceans. The nets used for fishing spend long times submerged in water, leaking toxins at will. They also often get broken up or lost in the oceans. Marine animals get trapped in these nets and/or swallow the toxic particles. 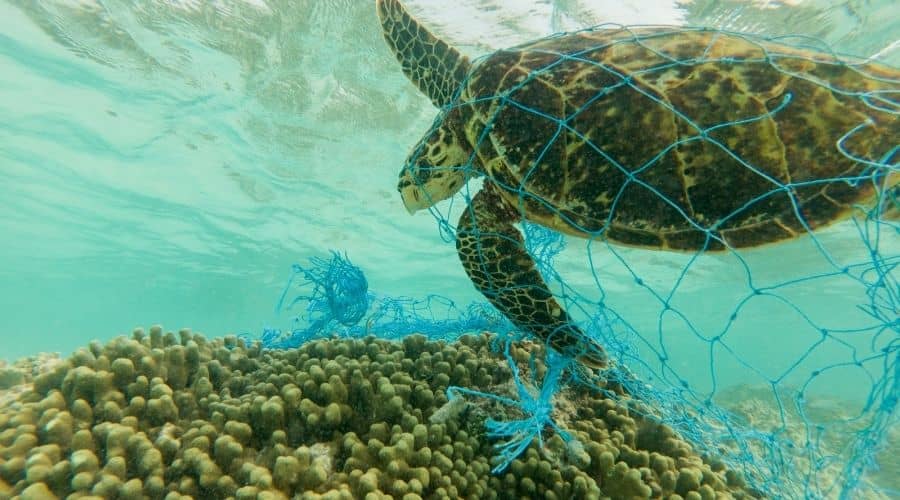 Today, it’s estimated that there are roughly 7.8 billion humans on the planet. With the rise of the human population, it’s no surprise that the demand for plastic will increase. If the numbers are anything to go by, you can be sure to see more plastic around you if we don’t do something about it.

About a third of the plastic that pollutes our land and oceans is from food wrappers. This includes everything from your gum wrapper to the bag of your favorite potato chips. We’re culprits of carrying packed foods almost everywhere we go. As such, this type of plastic garbage can end up even in the unlikeliest of places and not just in your town.

Plastic wrappers are common because they’re cheaper to produce. Unfortunately, once they make their way to the environment, animals and birds ingest them, and the toxic chemicals from the plastic can poison them or block their digestive system which eventually leads to their death.

What Are the Effects of Plastic Pollution?

There are quite a number of plastic pollution problems affecting humans, animals, and the environment. Here are a few significant ones:

How Does Plastic Pollution Affect Humans?

Plastic contains chemical additives used during its production. This makes it have potentially harmful effects on human health. When exposed to toxic chemicals humans can suffer from cancers, birth defects, impaired immunity, and other health problems.

Most of the plastic in your kitchen is made using BPA, a harmful chemical that’s believed to be an endocrine disruptor. We also drink microplastics via bottled water. The World Health Organisation (WHO) tested 259 bottles of water and found the presence of microplastics in 90% of the bottled water.

Essentially, when you eat a bite of food or even have a sip of water, you’re almost certainly taking in tiny plastic particles along with it. Microplastics could contain toxic chemicals linked to a variety of health problems, including reproductive issues, obesity, organ problems, and developmental delays in children.

Millions of animals are killed by plastics every year, from birds to fish to other marine organisms. Nearly 700 species, including endangered ones, are believed to have been affected by plastics. Many of these die from entanglement or starvation. Seals, whales, turtles, and other animals are strangled by abandoned fishing nets or discarded plastic bags.

Microplastics have also been found in more than 100 aquatic species, including fish, shrimp, and mussels. These microplastics can block digestive tracts or pierce organs, causing death. Animals also starve to death because too much plastic reduces the urge to eat.

Plastics are not harmful to aquatic animals only. Land-based animals, including elephants, hyenas, zebras, tigers, camels, cattle, and other large mammals, also consume plastics and in some cases cause death.

How Does Plastic Pollution Affect the Environment? 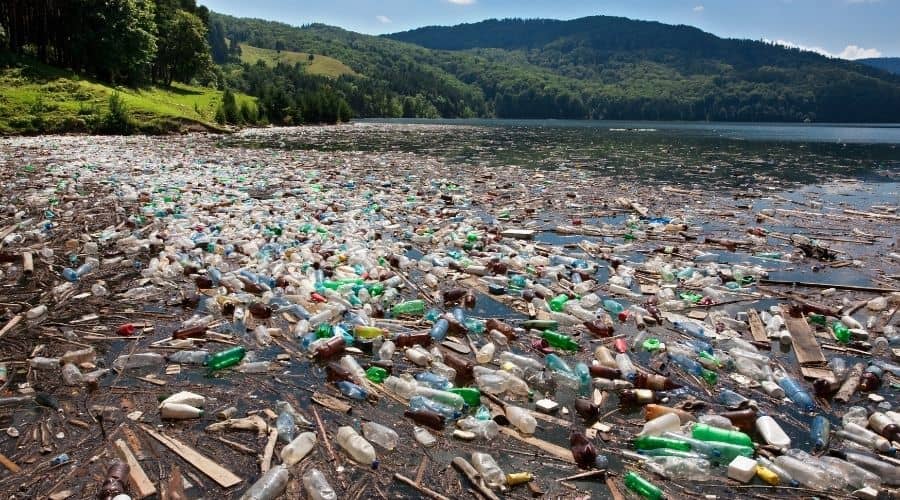 Consequences of Plastic Pollution (if We Don’t Take Action)

Can you see just how dire the plastic pollution situation is? Not to depress you further, but unfortunately, there is still a lot more doom to come if we don’t say no to plastic today.

Our throw-away culture is slowly eating the planet away. In fact, research shows that our planet will be fully consumed by plastic by 2050 if we don’t change our ways now. Today, the world produces 300 million tonnes of plastic waste. That’s almost similar to the weight of the entire human population.

Worldwide use of plastic has increased 20-fold in the past 50 years, and it is expected to double again in the next 20 years. If current trends continue, our oceans could soon contain more plastic than fish. Imagine that!

Solutions For Plastic Pollution: What You Can Do to Stop it

The solution for plastic pollution lies in individuals like you and me and companies around the world agreeing to implement practices that reduce plastic waste.

Here are a few reliable ways to reduce plastic pollution:

Change has got to start with us for these solutions to stick. Here are a few things you can change in your everyday life that will go a long way in reducing the amount of plastic in the world:

1. Toss out the plastic bag

Think about the number of bags you typically carry out every time you go to a grocery store. Do you still have them? I doubt you do. Plastic bags may be a huge convenience but they’re also a menace to the environment. Make it a habit to carry reusable bags for your trips to the grocery store. The good thing is that many of these bags fold up compactly to be portable and can easily fit in your handbag or glove compartment.

Hydrating frequently is important and it’s easy to reach for a bottle of water. But instead of grabbing plastic bottled water, how about buying a reusable water bottle and refilling it every time you need to quench your thirst. See the difference is that you’re gonna toss the plastic water bottle in the bin adding up to the already pilling pollution. But if you have a reusable bottle you can use it for years to come and rid the planet of thousands of plastic bottles.

3. Pack your food in a reusable food container

Do you love preparing your meals weekly and storing them in the fridge? Or do you prefer to order take-out? Whichever your preference, you can still reduce your plastic use by turning to reusable food containers. Pack your meals in glass containers and carry your reusable container to your favorite takeout joint and have them pack your food in it instead of their plastic ones. Using non-plastic food containers will cut down significantly on even a single meal’s waste.

4. Learn how to recycle

There will be cases where you can’t avoid using plastic. In such cases opt for recyclable options. It’s important that you try your best to handle items that can’t be reused properly and recycle what can be recycled.

Our homes harbor a lot of plastics that we can easily do without. You can make a lot of difference by making green choices at home, and abandoning the throwaway culture. Consciously choose products with less plastic packaging and aspire to have an eco-friendly and sustainable kitchen by using non-free kitchen products. 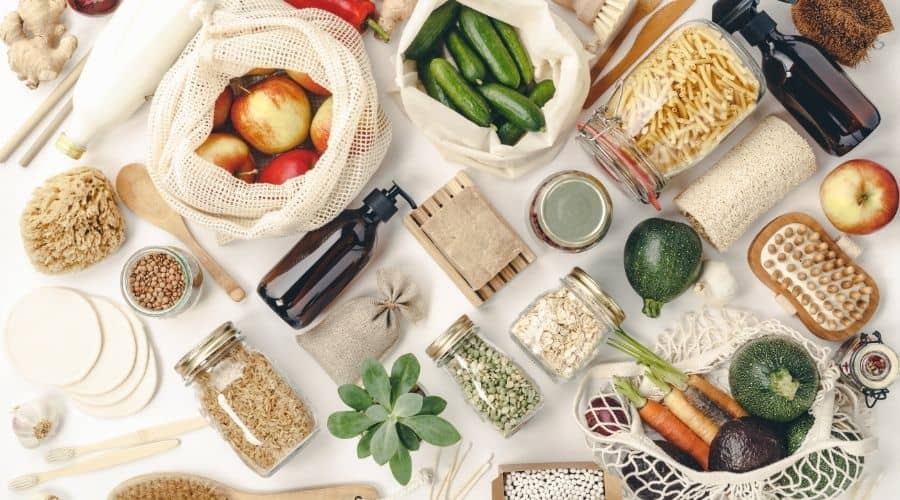 Use your voice/Petition the government

There’s still more that you can do outside your home and personal life. On a larger scale, you can fight plastic pollution by educating businesses on how to stop plastic pollution. Speak to local restaurants and businesses about available greener options for packaging, storing, and bagging items. You’ll be surprised that many businesses just need to know that consumers are receptive to these options.

Work with lawmakers and special interest groups to push for laws and policies that ban plastic use and promote environmentally friendly options.

Plastic pollution is a huge problem for the entire planet. Unless we come together and fight it, we’ll just choke it all up with plastic. Our little combined efforts—starting by saying no to single-use plastic—can significantly reduce the amount of plastic waste we produce. So go on and start today!

Interested in learning more about plastic pollution? Check out: 15 Plastic Pollution Facts That Will Inspire You to Live An Eco-Conscious Life.