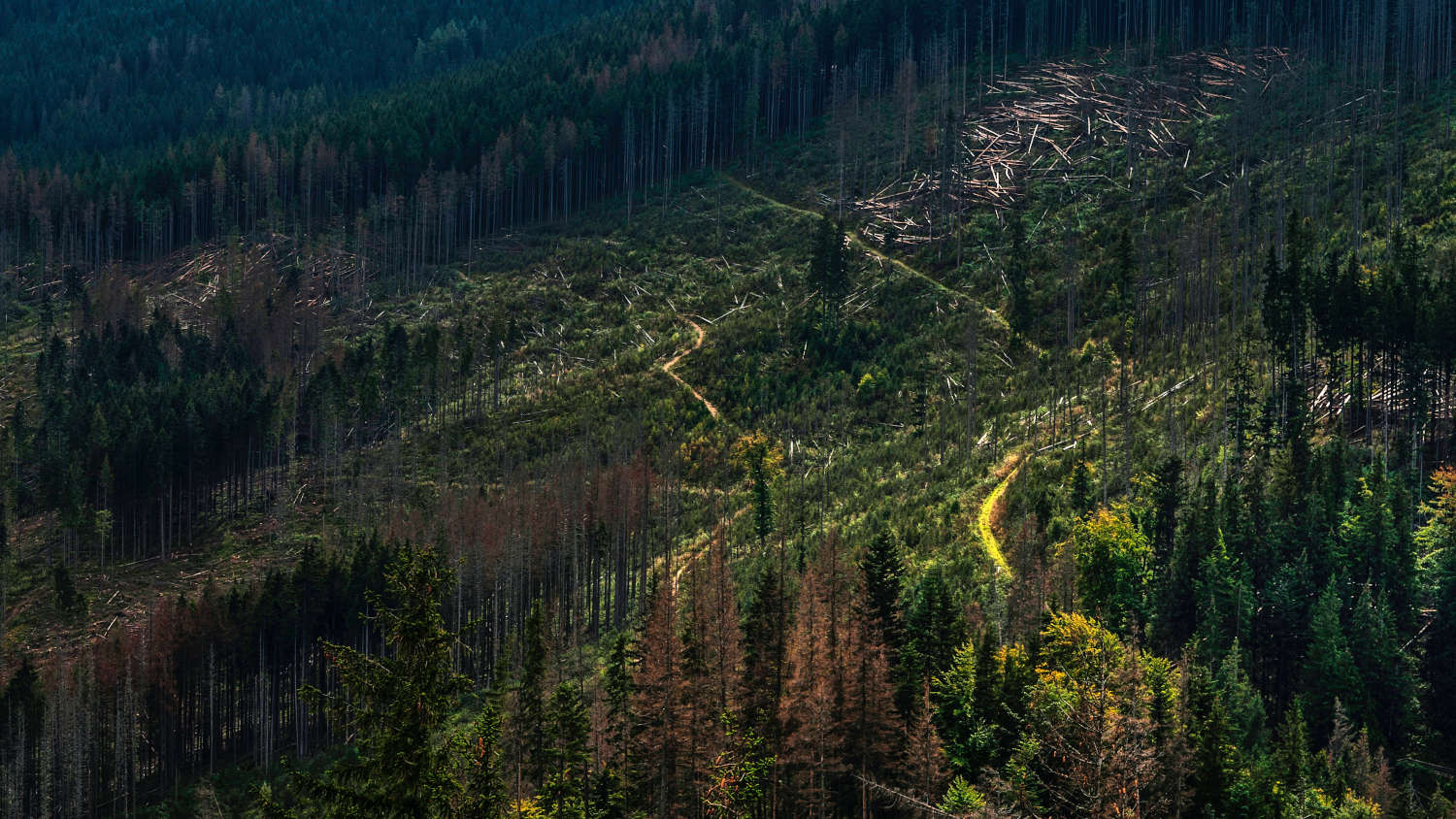 Did you know that forests cover more than 30% of the Earth’s land surface?

Unfortunately, the mass destruction of trees continues to rise by the day, risking the loss of all the benefits of trees, all for short-term gain.

According to The World Bank, about 3.9 million square miles of forest have been lost since the beginning of the 20th century.

As more and more people continue to pay attention to climate change, a lot of buzz has also been created around forest degradation. However, there’s still a lot of confusion about what deforestation really is — and why it matters.

In this guide, we break it down for you so you understand why deforestation is bad, and why it affects us all.

Let’s start with defining what is deforestation.

Deforestation is the permanent removal of trees to create space for other economic gains such as agriculture, grazing, or using timber for fuel, construction or manufacturing.

The biggest reason why it occurs is farming. 80% of destruction of trees is believed to be a result of extensive cattle ranching, and logging for materials and development.

Cutting down trees has been happening for decades. Probably since humanity started converting from hunter/gatherer to agricultural-based societies. This destruction became a pandemic after the onset of the modern era.

Deforestation can occur in any area densely populated by trees and other plant life. The majority of it, at the moment, is happening in the Amazon rainforest. Around 17% of the Amazon forest has been lost in the last 50 years, mostly to make room for cattle ranching.

According to a 2017 report by scientists at the University of Maryland, tropical areas near the Equator lost about 61,000 square miles of forest in 2017. This is an area the size of Bangladesh.

What is Driving Deforestation?

While forest degradation has continued to become a menace, it is no surprise that the main drivers are common commodities that we all come across daily.

At least three-quarters of forest loss is driven by agriculture. People are clearing forests to grow crops, raise livestock and produce wood products such as paper and timber.

Just four commodities—beef, soy, palm oil, and wood products—drive the majority of tropical deforestation. Out of these four, Beef, soy, and palm oil are responsible for 60% of forest cover loss in tropical forests in the world.

People are increasingly cutting down trees to make more room to raise cattle to produce beef. This habit has caused 41% of forest degradation. That’s 2.1 million hectares every year – which is about half the size of the Netherlands.

Read article: What Is Intensive Agriculture?

Palm and soy seeds, often categorized as oilseeds, drove 18% of forest loss in tropical forests. Production of palm oil in Indonesia takes the lead in this destruction followed by Malaysia.

The higher the demand for beef the higher the demand for soybean. Every year around 480,000 hectares are deforested for soy in major soy-producing tropical countries. Soy is mainly used to feed pork, poultry, and dairy cows. A significant amount is also used to produce vegetable oil and biodiesel. Latin America has large fields of soybean fields that are created from newly deforested land.

Wood products can be divided into two categories; pulp and timber. Pulp is made from tree fibers and used to produce paper and related products. Timber, on the other hand, is used for construction and making furniture. High demand for wood products has seen countries convert primary forests to tree plantations. This has also increased logging leading to the loss of forests.

Other commodities that are also driving forest degradation include coffee, rubber, cocoa, and sugar. Infrastructure and extractive activities, such as the expansion of mining, have also increasingly become important drivers to take note of.

Why is Deforestation Bad?

Forest destruction is a crisis for the whole planet and the sad truth is that this crisis affects us all, whether we realize it or not. Every every two seconds a chunk of forest the size of a football pitch is destroyed every single day.

Current destruction is so high that there’s only about half the number of trees in the world today than there were when humans first evolved. The fastest rate of forest destruction has been in the past couple of centuries.

As well as being stunningly beautiful, forests are vital for the health of our planet and when they are destroyed, plenty of consequences follow. There are myriad effects of deforestation including climate change, soil erosion, flooding, desertification, and more.

Let’s take a deeper look at some of the top consequences of deforestation:

One of the effects of deforestation on the environment is soil erosion. Trees bind soil firmly on the ground and when they are cut down, the soil erodes and washes away. This then leads to farming issues, clogged waterways, mudslides, and beyond. If this land is left bare, it becomes more susceptible to flooding, specifically in coastal regions.

Disruption of the water cycle

Trees cause water evaporation then release the evaporated water into the atmosphere via extracted groundwater, then it rains, reinvigorates the area, and the cycle continues. But if there are no trees, there will be no water cycle. And this will lead to desertification, leaving the land dry and at-risk for fire and loss of plants and wildlife.

Additionally, three-quarters of the Earth’s freshwater comes from forested watersheds. Without trees, the quality and quantity of water safe for drinking will be depleted.

Trees absorb a huge amount of harmful greenhouse gases such as carbon dioxide and methane. They store it in their trunks and leaves. If there are no trees, then these gases will stay in the air. Deforestation is responsible for 30 percent of global greenhouse gas emissions annually.

Loss of biodiversity is probably one of the most heartbreaking reasons why deforestation is bad. 70% of land animals and plant species live in forests. Deforestation is a threat to known and unknown species that might die as a result of the loss of their habitat. And when one species dies, others that are reliant on their existence are also affected, creating a chain effect.

The World’s Most Threatened Forests

There are hundreds of countries around the world that are home to some of the world’s most species-rich, culturally significant, and stunningly beautiful forests. Unfortunately, some of these gorgeous forests are hotspots and at risk of being extinct in 15 years if we don’t do more to save them.

The Amazon in South America is the world’s largest forest. It is also the forest that has undergone the most destruction. The major drivers of degradation at the Amazon are cattle ranching and agriculture. It is believed that over one-quarter of the forest will be without trees if destruction continues.

The Mekong continues to be converted for sugar, rice, rubber, and biofuels to cater to the rising population in the region.

The Atlantic forest spans parts of Paraguay, Brazil, and Argentina. This forest is one of the richest rainforests in the world. It is also where 75 percent of the Brazilian population lives putting a lot of pressure on the forest due to human activities.

Only 33 percent of the Borneo rainforest is currently remaining. Degradation in this forest is driven by palm oil plantations.

Forests in the states of Queensland and New South Wales continue to get depleted to create pasture for livestock.

The Congo basin contains 20 percent of the world’s tropical forests and the highest biological diversity in Africa. The forest is quite close to the urban centres placing it at risk especially since the human population here is expected to double by 2030.

Most forests in Eastern Africa are over harvested for timber and fuelwood, illegally logged, or converted for livestock and cash crops. Only 10 percent of the coastal forests of Tanzania and Kenya are standing.

New Guinea and its neighboring islands are home to the largest remaining tracts of tropical forest in the Asia-Pacific region. Agriculture, however, remains a great threat to this forest.

Riau province in Sumatra is the center of Indonesia’s palm oil production driving deforestation, even in protected forests and national parks.

How Does Deforestation Affect Humans?

Humans, though unaware, suffer the most from their destructive behavior of cutting down trees.

Forest destruction leads to climate change which then leads to altered weather patterns characterized by the extreme heat or too much rainfall. Such weather patterns and environmental changes cause low agricultural produce leaving people suffering from food shortage.

With climate change comes extreme weather conditions such as the intense heat or extreme rainfalls. Such conditions lead to the emergence of various health problems that may lead to death.

When we cut down trees, the soil erodes and washes away, causing farmers to move on leaving the land barren. Such land then becomes more susceptible to flooding causing deaths or displacement of people.

Consequences of Deforestation: What Will Happen If It Continues?

Amost 15 billion trees are cut down every year around the world. This comes with dire consequences for wildlife, people, and the climate. As the forests shrink, the planet suffers from wide-reaching problems, including soil erosion, water cycle disruption, greenhouse gas emissions and biodiversity losses.

Forests in addition to their numerous value to animals and man, are also uniquely valuable just by their very nature as forests. We risk losing all of it as we allow forest degradation to continue.

Stopping this harmful practice now is much more strategic and cost-effective than waiting to deal with the far-reaching consequences later.